Be inspired by Spiders to prevent a thief from stealing Halloween treats.

Although I have never been afraid of spiders I must admit that finding a poisonous redback in my shoes in Queensland did make me jump back. The redback spider is a beautiful black spider with a big red strip on the abdomen. A bite can be serious to humans but there is an antivenom.

We have a series of book about Australian Animals and the section about spiders is not as well-thumbed as the other books. But sitting safely in England reading the book I found the most interesting information about these little creatures. And I thought they provided a nice inspiration of celebrating Halloween in a different way. So slowly the idea behind Spooky – Math, STEAM – Biomimicry, Writing Prompts took shape.

The idea for making a spycamera grew from a video by the artist and creative workshop instructor Carla Sonheim. Artists can use a visual random approach to create a piece of art. Pablo Picasso identified parts of human faces and then changed the sizes and the way these parts were put together to create a face. This approach resulted in portraits where the person is seen both in profile and from the front.

What if this approach was used to draw a dog?

You could make a painting of a dog by cutting out the following six dog parts:
a. an eye
b. a second eye, three times larger than the first
c. a nose or a snout
d. an ear
e. a tail
f. a leg or a paw

After this, you draw six random dots on a piece of paper and then you glue two parts of the dog onto the paper. Then you turn the paper 90 degrees and you glue down another two parts. Finally, you turn the paper again and glue the remaining two body parts. This approach helps to break your “thinking pattern” about what a dog should look like. You are placing the parts at random and without relations.

Now the fun bit starts, where you twist and turn the paper and really look and try to “see” a dog. When the dog emerges you grab a crayon and add lines to finish it.

I used this approach to reinvented an orange juice machine. (You can read the blog post on Thinkiblity which is a blog I write together with Gijs, who is the owner of Practice for Bold Thinking a company that helps companies, research labs and governments to solve stubborn problems, search for new concepts and products, and focuses their organization on innovation).

So how can you reinvent a spycamera and also make it a little bit spooky to suit a Halloween project.

We thought about the best way to catch a thief who was trying to steal Halloween treats.

And after much think diving we decided that the best way was to prevent the crime from happening and since this innovation is inspired by Halloween, of course we are going to scare the thief away. And what better way than using a Spiderlicious thing.

We drew ideas from amazing facts that we found when reading about spiders. 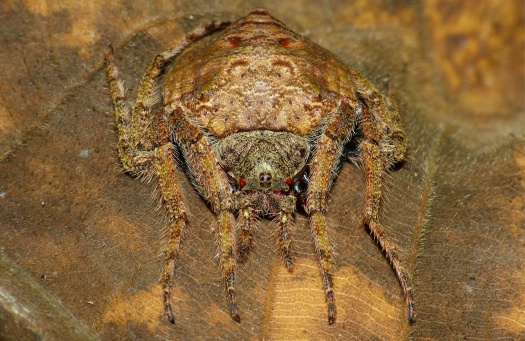 Then we cut out shapes:

a. an eye
b. a second eye, three times larger than the first
c. a third eye
d. a fourth eye
e. a web
f. a splat out shape

After that, the tricky part began and we needed a bit of imagination to try to see a way to prevent a thief from stealing the Halloween treats.

Our idea involved using a spycamera that was flat and could blend into the environment. Just when the thief was going to steal the treats a the camera changed and revealed its shape and a giant spider web was released down on to the treats so the thief could not steal them.

Biomimicry for young children mixes careful observations of animals and plants with imagination and a touch of magic. Using creative tools is a wonderful way to teach children to use a creative approach to thinking. In this example, the tool was a creative random visual approach to the think diving.